Michael Johnson is a British citizen. He was born in 1938 and has a degree in Modern and Medieval Languages from Cambridge University.

From 1960 to 1995 he worked for the United Kingdom Government, mainly in ministries concerned with trade and industrial affairs. For the last 20 years of his career he specialized in different aspects of international trade policy including commodity policy and, for a total of 7 years, UK bilateral trade relations with North America. He has also worked intensively on trade relations with the countries of Asia, particularly China and Japan.

From 1985 to 1993 he was coordinator of the UK Government's interests in European Union external trade policy and the General Agreement on Tariffs and Trade (now the World Trade Organization - WTO). He represented the UK on the EU's Article 113 (now Trade Policy) Committee at the Deputies level, co-ordinating EU trade policy. He served as chairman during the UK Presidencies in 1986 and 1992.

From October 1995 until February 1999 Michael Johnson was Senior Consultant for the London firm of specialist trade advisers, MGK International Trade Consultants. He is now an independent consultant. His work encompasses the WTO, the principles of trade administration, the institutions and policies of the European Union, and techniques of international negotiation. He has undertaken trade policy analysis and both advisory and training projects in a wide range of countries, particularly in Eastern Europe, the former Soviet Union, and developing countries.

Projects which Michael Johnson has undertaken with special regard to economies in transition or developing countries include the following:

1996: on behalf of the European Commission, advised the governments of both Lithuania and Estonia, for the purpose of their WTO accession negotiations, on how to formulate their submissions to the WTO concerning agricultural support, as well as on wider issues of trade and tariff policy.

1997: undertook a similar project for the Government of Moldova on behalf of the UK Government. He returned to Moldova in 2001 within the framework of a European Union (TACIS) project, to advise the Government on procedures for implementation of membership of the WTO.

1997 and 1998: participated in an EU-funded training programme for trade officials in Namibia, specifically related to the WTO and observance of the WTO Agreements.

November 1997: engaged by the World Bank to advise the Government of the Former Yugoslav Republic of Macedonia on the administration of restrictive trade quotas, in the light of WTO requirements and of European Union law.

1998: commissioned by the World Bank to carry out for Moscow State University a study of the principles of regulation of the insurance industry which was translated into Russian and widely circulated. He also contributed to a separate study for the World Bank of Russia's trade interests, in the context of its WTO accession negotiations, in the communications, construction and transport sectors.

1999: participated on behalf of the European Commission in a course for trade policy officials in Yerevan, Armenia, relating to the obligations which Armenia will assume on accession to the WTO.

March 2001: conducted and chaired a trade policy training seminar in Nairobi for officials from Commonwealth African countries, under the auspices of the UK Department for International Development and the Department of Trade and Industry.

2001, continuing into 2003: on behalf of the United Kingdom Government, advised the Government of Ghana on consultations, communications and decision-making procedures related to trade policy formation.

2001, continuing into 2003: engaged on behalf of the UK Government in a project in Ukraine on communications and decision-making procedures related to trade policy formation and WTO accession.

2002: participated in studies on behalf of UK Department for International Development of (1) the possible economic consequences of a Free Trade Area Agreement between the EU and Ukraine, and (2) policy options for the EU in future economic relations with Moldova and Ukraine.

2002: participated in study on behalf of UK Department for International Development for Government of Moldova of Moldova's priority objectives for WTO Doha Development Agenda negotiations.

2003: contributed to two separate studies to assist the African, Pacific and Caribbean (ACP) states in preparing for (1) negotiation of partnership agreements with the European Union and (2) further negotiations under the WTO Doha Development Agenda.

2003-2004: research into the development of trade of the Western Balkan countries (1) with the European Union and (2) within South-Eastern Europe.

2004-2005: collaborated with IDPM, University of Manchester, on a study on behalf of the European Commission of the economic and social consequences, particularly for developing countries, of further liberalisation of trade in distribution services.

2004: participated in training seminars in Vietnam concerning Vietnam's negotiations to join the WTO.

2005: under contract to Government of Ghana, acted as expert on multilateral and regional trade policy for implementation of Ghana National Trade Policy.

2005: participated in seminars on behalf of the EU on adaptation of financial services regulation in the Western Balkan countries to conform to EU law and practice.

2005: participated in World Bank project in Ukraine to prepare for Ukraine's accession to the World Trade Organization.

November 2005-November 2006: on behalf of the European Commission, service as part-time adviser on trade policy to the Government of the Republic of Maldives.

June 2006-Q1 2007: participation in EU-funded project in Vietnam to raise awareness among officials and others of WTO Doha Round negotiating issues.

March 2008-September 2009: Team leader for project under the Integrated Framework for developing countries, to identify opportunities for the development of service activities in Maldives.

December 2008-April 2009: Under contract to UNESCAP, advised the Government of Nepal on procedures for compliance with WTO requirements, including notification to the WTO of trade measures.

Since April 2011 his main professional activity is as Senior Associate for the London-based firm Saana Consulting Ltd.

Under Saana's contract with the UK Government's Policy Development Facility for Nigeria he was Team Leader for a fundamental review of the trade policy of Nigeria (2011-14).

He assisted (2012-14) with the implementation of the UK Trade Advocacy Fund (TAF), for which Saana and Crown Agents were fund managers. In this capacity he participated in the scrutiny of applications for grants under TAF and in the technical appraisal of project proposals by consulting firms, as well as supervising the preparation of four highly-praised and widely consulted practical guides which TAF published for developing countries on aspects of international trade negotiations.

He reviewed the provisions of bilateral investment treaties as part of a project offering investment policy advice to the East African Community (2013-14).

In 2015 he led a review of the impact on trading enterprises of Government tax measures and other forms of trade barriers in the Republic of Burundi, and also assisted with preparation of a report outlining proposals for the development of international trade corridors in West Africa.

Michael Johnson has undertaken a wide range of other consultancy projects including:

the design, on behalf of the European Commission, of a major trade policy training programme for Chinese trade officials;

participation on behalf of the European Commission in a joint study with the Government of Canada of the future of EU/Canadian trade relations;

in 1999, participation as co-author in a study commissioned by UNCTAD of the interests and priorities of Islamic developing countries in further negotiations for the liberalisation of international trade in services;

in 1999, 2000 and 2001, on behalf of private clients, a series of in-depth studies of the European Union's preparations for new multilateral trade negotiations in the WTO.

In March 2000 on behalf of the UK Government Michael Johnson led a trade-related study visit to the WTO Secretariat in Geneva and to the European institutions in Brussels for senior officials from CIS countries.

In 2000, worked with the University of Sussex European Institute on a study of the consequences for EU commercial policy of further enlargement.

He has taught in the United States, and has lectured and conducted seminars at several British universities.

In July 1998 the Royal Institute of International Affairs in London published his study European Community Trade Policy and the Article 113 Committee. He has published an analysis of the WTO General Agreement on Trade in Services. 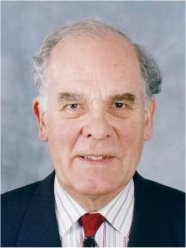